A family-run mountain, built for your family. 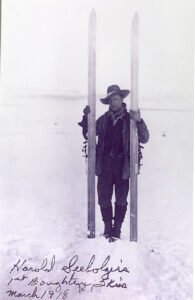 Harold Seeholzer, the founder of Beaver Mountain, buys his first pair of skis.

Logan Canyon is open to year-round traffic, and the Ski Club decides to put a ski tow at Beaver Mountain. It consisted of a DeSoto car motor and a steel cable, and the operator had to climb the mountain every morning to start it. 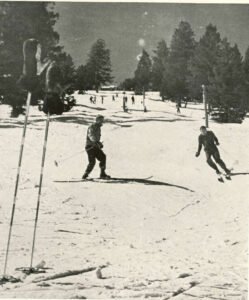 After installing a tow at Beaver Mountain and attempting to run a new tow in the “Sinks” a few miles farther up Logan Canyon, the ski club decides to take proposals to take over the entire operation. Harold Seeholzer’s is accepted.

A 1,000 foot rope tow was put in at Beaver Mountain, along with a warming lodge (which is still used today as the ticket office) and Harold’s dream of a family-owned resort that would be affordable for other families began to take shape.

A 2,700 foot T-bar is ordered and Harold and Luella start involving their young family in the work, teaching them to love the mountain as much as they do. 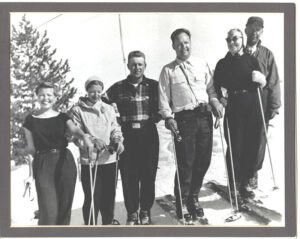 Harold and Luella call their family together and form a corporation, including their two sons Loyal and Ted and two daughters Dixie and Nancy. The entire family (including the girls, which was pretty rare at the time!) worked to install the Beaver Face Lift, using a sheepherder’s horse to carry the wheels. The chair is still in operation today.

The family begins construction on Little Beaver double chair, the first beginning ski lift at Beaver Mountain. That same year, they begin construction on the 81-foot A-fram day lodge and the parking lot.

The family installs a Poma Lift, which traveled almost twice as fast as the double chair, with a capacity of 600 skiers per hour, opening up five new trails and bringing area capacity to 2,400 per hour. 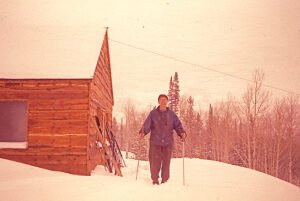 Harold Seeholzer, the father and founder of Beaver Mountain, loses a courageous bout with cancer, and is mourned by his family and everyone who had come to love his mountain. His dream had always been to put a double-chair lift from the bottom to the very top of the mountain, and the family vowed to fulfill it. 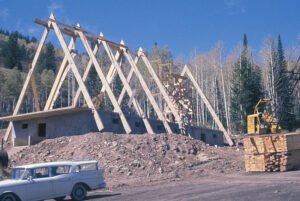 “Harry’s Dream,” a 4,600-foot double lift with 137 chairs and a capacity of 900 skiers per hour opens on January 31. Nearly 50 acres of new runs are cleared for use, with trails running over two miles. Harry’s Dream, indeed.

That same year, Harold’s second son, becomes General Manager at Beaver Mountain and his wife, Marge took over the ticket office full time. Ted’s brother, Loyal, helped with bookkeeping and payroll in his spare time and brought his wife in to help with the ski report and the ski shop. Add Ted’s sisters Nancy and Dixie to the ski shop mix and you’ve got a family affair all through the 70s and 80s. 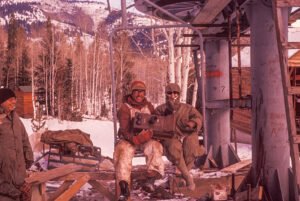 After the generator building finally burns down one night, Beaver Mountain finally gets electricity after running off a generator for 47 years. The area won’t get phone lines until the mid-90s.

Ted and Marge Seeholzer officially buy the company, with the hopes of bringing in their daughter Annette West and her husband Jeff, as well as their son Travis and his wife Kristy in to the operation.

Harry’s Dream lift is upgraded to a triple chair, increasing the uphill capacity to 1400 skiers an hour.

The Little Beaver lift is replaced with a triple chair with night skiing lights, changing the lines of the lift and lowering the bottom terminal several hundred feet for increased vertical and access to additional runs.

May brings the end of an era as Ted Seeholzer passes away at 81, leaving behind the legacy of a loving family and countless improvements that kept Beaver Mountain thriving. He performed every job at the mountain, and took great joy in seeing skiers and riders discover a love for skiing. 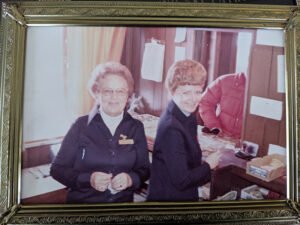 Beaver Mountain celebrates 75 years in business, now with Marge (whom Ted always referred to as “the true boss”) as President. She continues to work in the ticket office as she always has, 6 days a week. 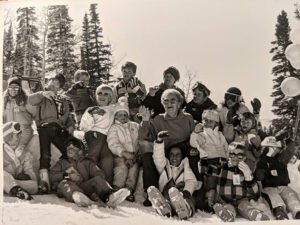 Still a family affair, Beaver Mountain rolls on, with Marge continuing in her role as president, keeping in touch with guests at the ticket chalet.

Travis and Jeff, Ted and Marge’s sons, still work at the mountain. Jeff is Mountain Manager and Travis is Mountain Operations Manager. Each of them has also done just about every job at the mountain as it’s the Seeholzer Way to just do it yourself. Jeff’s wife Annette works weekends at the ticket office and Kristy Seeholzer, Travis’ wife, splits her time working at the Logan office and in the ticket office with Marge, whose hours the family finally convinced to cut to 65 a few years ago.

Beaver Mountain is now the longest continuously-run family-owned mountain resort in the United States. It’s been a labor of love from the start, as the whole Seeholzer family continues to find renewed joy every season when they see new families arrive, and watch new generations make their first tracks on the mountain home they worked so hard to make.